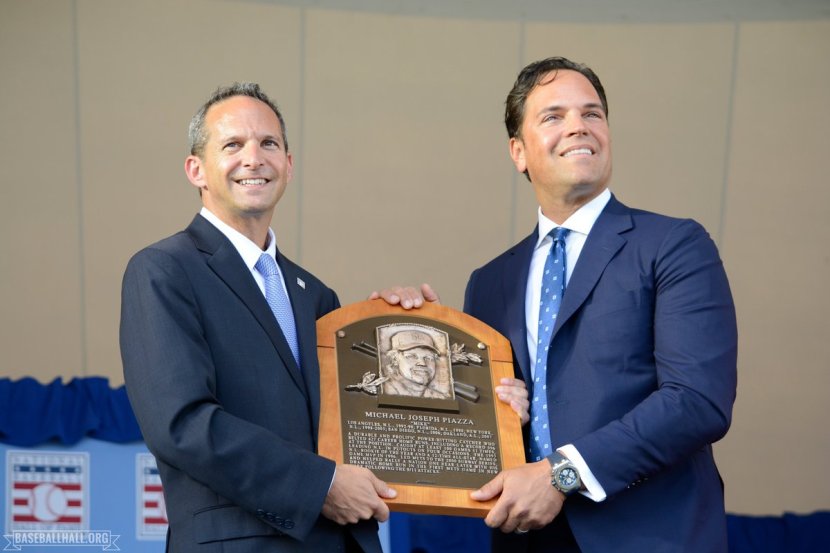 Above The Mendoza would like to congratulate Mike Piazza on his induction into the Baseball Hall of Fame today. I remember Mike’s glory days vividly growing up as a Mets fan, and he is one of my all-time favorite Mets players. The Hall of Fame catcher was easily the best offensive catcher I have ever seen in my lifetime, and his career statistics back it up. A career .308 hitter with 427 home runs, is virtually unheard of from the catching position. Piazza also holds the record for most home runs by a catcher with 396.

While Piazza had been drafted by the Los Angeles Dodgers and he began his career there, the most impactful moments of his career took place in the Big Apple as a member of the Mets. Most notably his historic two-run home run back on the night of September 21st, to lift the Mets over the Atlanta Braves, in the first game played back in New York since 9/11. I’ll also never forget Game 2 of the 2000 World Series when Piazza did not back down from Yankees pitcher Roger Clemens, after Clemens threw a piece of a bat at Piazza. Piazza had so many great moments against the Yankees, as they battled closely during interleague play, and it’s hard to pick a moment of his that resonates stronger than the other.

But the hope Piazza would always bring to the plate as he would dig in the dirt, then tap his cleats, followed by tapping his bat over home plate, and look to send a ball to the moon, serves as summertime nostalgia as I watched his speech today. It’s been a long road for #31 to get here, but at this point all that matters is that he is finally in. Piazza in my eyes has always been the ultimate professional and he is well-deserving of the honor, and praise he has received today.

Being able to watch him and Ken Griffey Jr. take two opposite roads to get here, as Griffey was the number one overall pick of the 1987 MLB Draft and Piazza was the 1,390th pick of the 1988 MLB Draft, was a true representation of how there is no right or wrong way to accomplish greatness. Not only in baseball but in life in general. It’s never how you start but it’s always how you finish and today’s ceremony truly displayed that.

I believe I am even more excited to see Piazza’s number finally retired by the Mets organization next Saturday night, as it is long overdue. Next weekend’s series against the Rockies at Citi Field can technically be referred to Piazza Appreciation Weekend due to the retirement ceremony, and the different Piazza themed giveaways at the park. I don’t believe we will ever see another catcher have the offensive impact, as well as the community impact that Piazza had in New York. And I am totally ok with that because I selfishly got to experience his greatness first-hand as not only a Mets fan but as a fan of the game of baseball during his era. Congratulations Mike!