The Los Angeles Dodgers (27-24) defeated the New York Mets (28-21) by the final score of 4-2 tonight at Citi Field. For a full boxscore recap follow the link below…

It has been a rough couple days for us Mets fans. Last night was a complete disaster and tonight was a heartbreaker, after the Mets rallied in the bottom of the eighth on a Curtis Granderson RBI triple off of Dodgers reliever Mike Liberatore, to tie the game. Jeurys Familia has not looked himself at all in his last two outings, both coming against the Dodgers. Tonight in the top of the ninth, Familia loaded the bases, and then allowed a two run RBI single to Dodgers first baseman Adrian Gonzalez. It would probably be in Familia’s best interest to take a day or two off as he almost cost the Mets a victory on Friday but ultimately cost them one tonight. I believe fatigue could be the factor as Familia has seen his ERA rise to 4.07 with tonight’s outing. However despite the loss, I loved the Mets fight tonight as they immediately took advantage of the Dodgers pulling Kershaw out of the game and tied it up. With tonight’s loss the Mets drop a game out of first place behind the Washington Nationals.

The Mets will have to put this game in the back of their mind as quickly as possible as they have a matinee game tomorrow afternoon against the Chicago White Sox. The Mets will unpleasantly welcome another Mets killer to Citi Field, as White Sox shortstop Jimmy Rollins will make his 2016 Citi Field debut at some point in this series. With Rollins great career numbers against the Mets, I wouldn’t be surprised in the least bit if he starts all three ball games.  It appears we also won’t see recently acquired James Loney until Tuesday as the Mets will face a left-handed pitcher tomorrow afternoon. The White Sox who had been on top of the AL Central Division for the majority of the season have been struggling recently falling out of first place, and this would be a great series for the Mets to get back on track against a struggling ball club.

DODGERS-METS NOTES: The Mets and Dodgers split a four-game series in LA on May 10-13…The last time the Mets won a home series vs. the Dodgers was in 2011.

LOOKIN’ MIGHTY FAMILIA: Jeurys Famiia is 16-for-16 in save opportunities and is tied for second in the majors in saves…Familia has 32 consecutive saves in the regular season dating to August 1, 2015, which is the longest streak in team history, one more than Billy Wagner.

GETTING WRIGHT ON TRACK: David Wright has homered in each of his last two games and has four RBI in those contests…Wright has five RBI in his last four games and has hit in five straight games, going 5-20 (.250)…Wright’s four homers this month are the most for him in a calendar month since June, 2013 (five homers)…Wright holds a career .332 average against the Los Angeles Dodgers which is tied with Colorado Rockies for his highest average against any NL opponent.

METS VS. URIAS: Dodger’s left-hander Julio Urias will be making his major league debut against the New York Mets tonight…The 19-year old is currently ranked as the Dodgers number one prospect and number two prospect in all of baseball by MLB.com…Urias currently held a 27 inning scoreless streak at Triple-A Oklahoma City before being recalled.

New York Mets starting pitcher Bartolo Colon wipes his face as he walks off the field after giving up four runs to the Los Angeles Dodgers in the first inning of a baseball game in Los Angeles, Thursday, May 12, 2016. (AP Photo/Chris Carlson)

Last night the New York Mets fell victim to the Clayton Kershaw Express as he blanked the Mets in a complete game shutout while only allowing three hits and striking out 13. END_OF_DOCUMENT_TOKEN_TO_BE_REPLACED 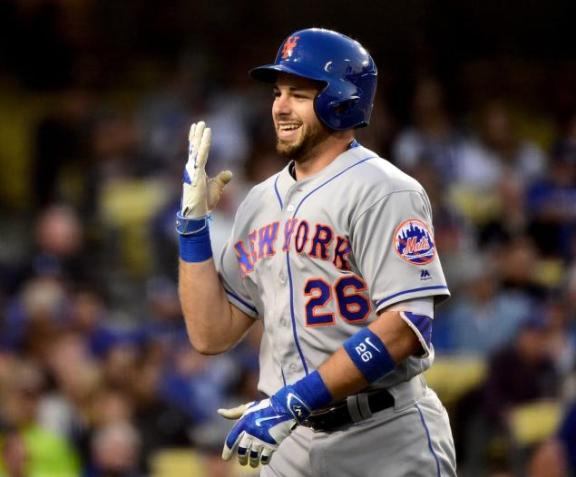 ON A SERIES ROLL: Having secured at least a series tie, New York is now undefeated in its last eight series, winning six and tying one (with this series outcome still to come)…The Mets have not lost a series since April 11-13…Overall, New York is 3-0-2 in road series.

PITCH HAND STRONG: The Mets rank second in the majors with a 2.78 team ERA…New York has allowed the fewest homers (20).

PEN PALS: New York’s bullpen leads the NL and ranks fourth in the majors with a 2.66 ERA (28 earned runs/94.2 innings)…They have stranded 37 of 46 inherited runners (80%), the fourth-best percentage in the majors…The pen has 29 holds, the most in the majors. 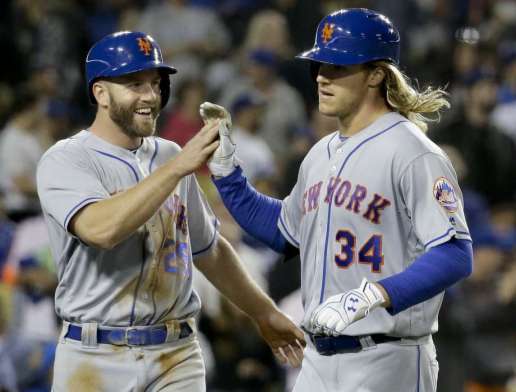 The New York Mets (21-12) defeated the Los Angeles Dodgers (17-17) by the final score of 4-3 tonight at Dodger Stadium. For a full boxscore recap follow the link below…

Noah Syndergaard took over Hollywood tonight on the eve of his anniversary of his major league debut, and had a historic game at the plate to provide himself with all of the run support he would need. Syndergaard took Dodgers starter Kenta Maeda deep twice tonight, hitting a solo home run in the bottom of the third, and then hitting a three-run home run in the top of the fifth. Both of Syndergaard’s home runs were absolute bombs that registered over 400 feet, and they displayed the raw power that Thor possesses with a bat in his hand. Syndergaard joins Walt Terrell as the only Mets pitcher to hit two home runs in a game, and he tied the franchise record for a pitcher with four RBI’s tonight. Syndergaard also delivered on the mound as he mowed through the Dodgers lineup and only made two mistake pitches that hurt him tonight. Syndergaard had surrendered a solo home run to Corey Seager in the bottom of the third, and a solo home run to Yasmani Grandal in the bottom of the fourth, which were his only mistakes. Syndergaard’s fastball was once again registering in the triple digits and he seemed absolutely locked in tonight. It was especially helpful for Syndergaard to pitch deep on a night where the Mets are playing a pitcher short due to Steven Matz’s recent elbow soreness.

Besides Syndergaard’s historic night at the plate the Mets bats could not get much going. The Mets left nine runners on base tonight, and were 1-9 with runners in scoring position. The Mets let a golden opportunity slip leaving the bases loaded in the top of the seventh inning with two outs, and Eric Campbell going down striking out. They also had another opportunity in the top of the fifth with the bases loaded and one out, but both Syndergaard and Curtis Granderson struck out. It’s a good thing Syndergaard was able to take matters into his own hands because he accounted for all of the Mets runs tonight.

It was not an easy ninth inning for Jeurys Familia as he did not have his best stuff tonight and was struggling to throw strikes. Adrian Gonzalez started the inning of with a hard hit double to center field, but Neil Walker and Asdrubal Cabrera each made absolutely fantastic plays to rob the next two batters of hits to help bail Familia out. Familia’s fortunes then seemed to change as he then made quick work of Yasiel Puig firing three straight strikes to end the ball game. Familia is now 12 for 12 in save opportunities thus far this season and he is a big piece to this team’s success. There is no reason to think that Familia won’t save around fifty ball games for the Mets this season.

It appears that Mets brass are considering sending Eric Campbell down to AAA for lefty Sean Gilmartin, in order to give the Mets another arm out of the bullpen, when they head to Colorado after tomorrow night’s game. The Mets are going to be playing shorthanded for the next four days until Steven Matz is checked out by a doctor Monday, and the extent of his soreness is medically diagnosed.

Also one last note Mets fans may be concerned about, Chase Utley was not plunked in any of his four plate appearances, and went 0-4 tonight.

METS-DODGERS NOTES: The Mets are 11-9 in Los Angeles (including the playoffs) since 2011.

NLDS REMATCH: The Mets and Dodgers met in last year’s NL Division Series…New York won Games 1 and 5 in Los Angeles to advance to the NLCS…Steven Matz started Game 4 at Citi Field and took the loss, allowing three runs in 5.0 innings.

SCORING FIRST LEADS TO SUCCESS: The Mets have outscored the opposition 23-5 in the first inning this year…The five first-inning runs allowed are the fewest in the majors…New York has scored first in 18 of its last 24 games…The Mets are 17-3 when they score first this year, including 10-2 on the road.

THE MATZ MACHINE: Steven Matz is 4-0 with a 0.67 ERA (two earned runs/27.0 innings pitched) over his last four starts…He has struck out 29 and walked five in that stretch…The last Mets starter to win five straight starts was Jacob deGrom, July 8-August 2, 2014…Matz has not allowed a run in a career-high 13.2 innings entering tonight…Matz has allowed only one extra-base hit to a left- handed batter in his major league career.

MATZ VS. DODGERS: Has made two career starts (one regular season, one postseason) against the Dodgers…Won, 8-0, on July 5, 2015, at Dodger Stadium while tossing 6.0 scoreless innings and allowed two hits… Matz struck out eight and walked two…Started Game 4 of the NLDS against Los Angeles-NL at Citi Field…Took the loss in the Mets’ 3-1 defeat…Pitched 5.0 innings and allowed three runs, on six hits…Struck out four and walked two.

HOMER PERCENTAGE: The Mets have scored 75 of their 133 runs this year on home runs, for a 56.4 percentage, the highest rate in the majors according to the Elias Sports Bureau.

METS VS. KAZMIR: The Mets will face their former top pitching prospect Scott Kazmir tonight…Kazmir was drafted by the Mets in the first round of the 2002 MLB First Year Player Draft with the 15th pick out of the University of Notre Dame… On July 30 2004 Kazmir was traded along with minor league pitcher Joselo Díaz to the Tampa Bay Devil Rays for veteran starting pitcher Víctor Zambrano and minor league reliever Bartolomé Fortunato…Kazmir has made 3 career starts against his former organization and has posted a 2-1 record with a 4.80 ERA in 15 innings pitched…Kazmir has struck out 22 and walked 4…Notable Mets career numbers against Kazmir at the plate are posted below… 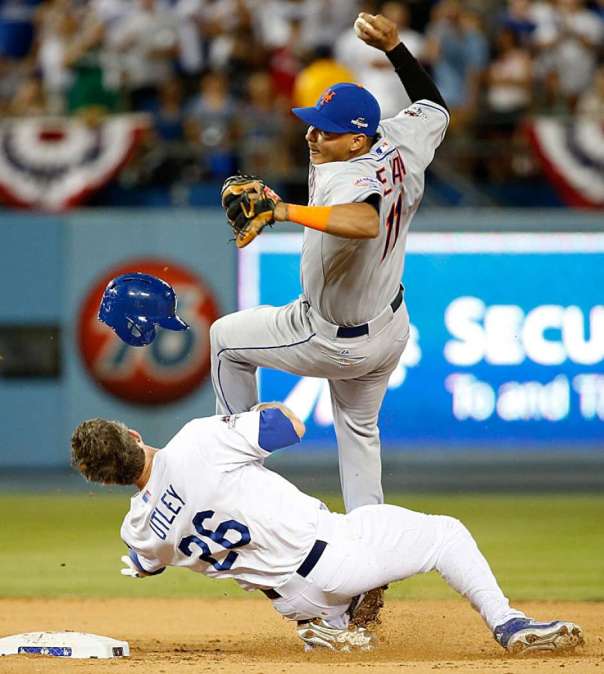 Los Angeles Dodgers and Mets nemesis, Chase Utley will not serve his 2-game suspension that was handed down by Major League Baseball, after his takeout slide into Ruben Tejada last postseason. Utley had been appealing the suspension and a decision was announced today to drop Utley’s suspension. END_OF_DOCUMENT_TOKEN_TO_BE_REPLACED