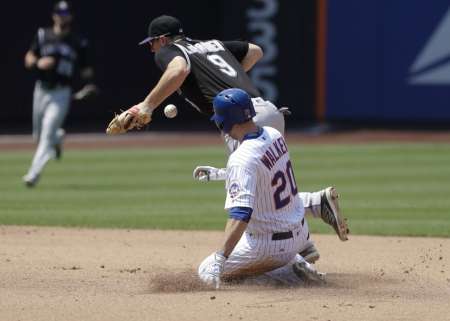 The Colorado Rockies (50-52) defeated the New York Mets (53-48) this afternoon by the final score of 2-1. For a full boxscore recap follow the link below…

Back-to-back heartbreaking losses for the Mets in less than 24 hours. The Mets took a 1-0 lead into the ninth inning, but Jeurys Familia was unable to close the door as he allowed two runs, before being lifted for Hansel Robles with the bases loaded and one out. Originally Manager Terry Collins said Familia would be unavailable today after pitching two days in a row, but Familia must have changed his mind because he let Familia pitch this afternoon. While the result isn’t all on Familia, as a misjudged ball by Rene Rivera that appeared to be going foul but ultimately stayed fair, and a fielding error by James Loney helped the Rockies put two runs on the board.

You have to think Familia will be given a day or two off to help clear his head and get out of this funk. He also has thrown 69 pitches over his last three appearances since late Tuesday night, so there has to be some sort of fatigue setting in, which is another perfect opportunity to give him a few days off. Familia was on a historic run, and while he has come back down to Earth the last couple of days, the Mets are going to need him to be at his absolute best down the stretch if they want any shot of the postseason.

It’s getting redundant with the Mets offense day in and day out. The Mets had multiple opportunities to add to their lead this afternoon and they simply failed to do so. The Mets were 1-9 with runners in scoring position, and blew a no-out bases loaded opportunity in the bottom of the seventh. It’s becoming increasingly frustrating to watch, as the Mets have no problems putting men on base, but are historically becoming one of the worst teams ever when it comes to driving in runners on base. The Mets are hitting a paltry .206 with runners in scoring position this season.

Right now I’m not sure how their offensive woes can be fixed as it is a plague throughout the Mets lineup. The Mets certainly have the offensive talent to be a league average offense, if not better. But for whatever reason this season the offense just hasn’t shown up. The Mets postseason chances look slim when you watch the offense consistently underperform, but I’m trying to keep holding out hope that they will figure it out sooner rather than later.

The Mets who were 7-0 against the Rockies last season, are now 0-4 against them so far this season. Ouch.

Today’s game can be seen on SNY and MLB Network.

ROCKIES-METS NOTES: The Mets are 61-30 vs. Colorado at home…The .670 winning percentage is the best vs. any team (min. 15 games) in team history…The Mets have won 10 straight games vs. the Rockies at Citi Field dating to August 6, 2013…The 10- game home winning streak is tied for the sixth-longest in franchise history vs. one club.

DAY BASEBALL: New York is 19-12 in day games (11-5 at home)…The Mets have a .613 winning percentage in day games which ranks fourth in the majors…The Mets lead the majors with a 2.74 team ERA during the day.

deGROM IN deDAY: Jacob deGrom is 15-3 with a 1.63 ERA (32 earned runs/176.2 innings) in 27 career daytime starts…That is the best daytime ERA among qualified major league pitchers over the last three years.

LOOKING TO HOLD A RECORD: Addison Reed has tossed 14.2 scoreless innings while allowing only four hits and striking out 22 since June 25… He is second in the majors with 24 holds…Aaron Heilman holds the single-season franchise record with 26 holds in 2006… Reed has the fifth-lowest ERA among NL relievers (1.88)…Min. 40 innings.

STREAK ENDS: Jeruys Familia saved 52 consecutive games from August 1, 2015-July 26, 2016, the third-longest streak in major league history…He suffered a blown save last night vs. St. Louis…Familia ranks sixth on the club’s all-time save list with 85 saves…Tug McGraw is fifth on the list with 86.

DEGROM VS. ROCKIES: In three career starts vs. the Rockies, deGrom is 2-0 with a 1.27 ERA…In his one start this season against Colorado (at Coors Field), deGrom pitched 6.1 innings and allowed three runs on four hits in a no-decision while striking out three and walking three.

METS VS. ANDERSON: The Mets have never faced Tyler Anderson and no current player on the roster has an official at-bat against the left-hander. 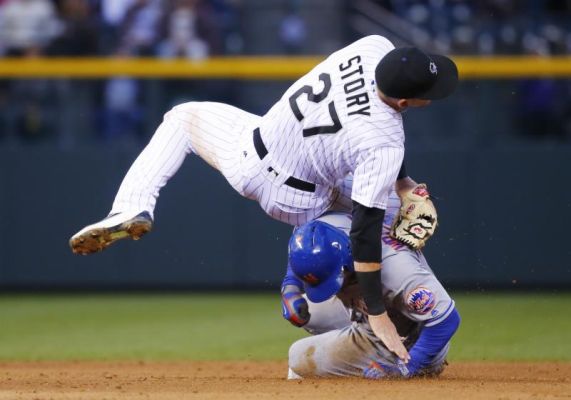 The New York Mets will host the Colorado Rockies for a four game series at Citi Field beginning Thursday afternoon. Here are a few things to know heading into the series. END_OF_DOCUMENT_TOKEN_TO_BE_REPLACED 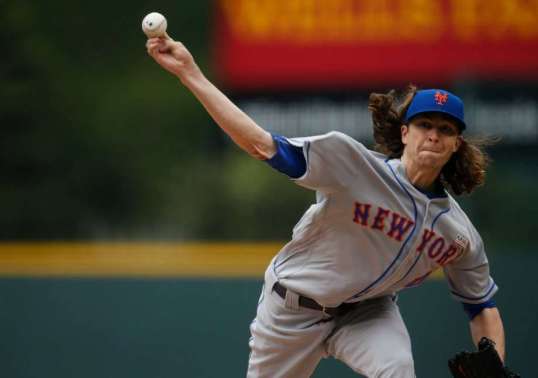 The Colorado Rockies (19-18) defeated the New York Mets (21-16) this afternoon to complete the sweep by the final score of 4-3. For a full boxscore recap follow the link below…

This was a bitter loss to end a tough road trip for the New York Mets. It’s hard not to argue that the umpires played a pivotal role once again in today’s loss, as second base umpire Rob Drake made an absolutely awful call in the top of the eighth inning on the basepaths. As Juan Lagares was advancing from second base to third on a Lucas Duda groundball, Rockies third baseman Nolan Arenado missed a tag on Lagares and threw to first base for the out. Shortly after the play second base umpire Rob Drake immediately called Juan Lagares out for running outside the baseline. On many replays, Lagares appeared to be completely inside of the baseline, and third base umpire Carlos Torres had also immediately called Lagares safe after Arenado’s missed tag, as he was in front of the play. It was another bad missed call by the umpires as it robbed the Mets of an opportunity to have runners on third and second base with two outs, and Neil Walker coming to the plate to potentially tie or take the lead. Manager Terry Collins simply came out of the dugout to understand the situation but did not argue any further.

The Mets bullpen, which has been very reliable, coughed up today’s lead in the bottom of the seventh inning. After Jacob deGrom had put Rockies second baseman DJ LeMahieu on base with a walk, he struck out catcher Dustin Garneau but also threw a wild pitch that advanced LeMahieu to second base. Terry Collins decided to pull deGrom after that at-bat with 102 pitches and allow Jim Henderson who was pitching on back-to-back days to get out of the jam. After throwing two balls, Raburn ripped the next Henderson pitch over the right center field wall and that was all she wrote. Henderson has struggled on back-to-back outings this season, and you wonder if that will play into Henderson’s usage down the line. The Mets also drop to 21-1 this season when leading after seven innings, which displays how dominant the bullpen has been this season.

The Mets completed their season-high eleven game road trip with a 4-7 record. It was a tough go of it, especially in Colorado, but the Mets will have a day off tomorrow to recharge before the Washington Nationals come to town, in what is sure to be the first of many intense games between both clubs this season. I am looking forward to this series and it will be very interesting to see if the Mets continue the recent trend of walking Bryce Harper and not giving him much to hit around the strike zone. The Nationals have struggled since this strategy has been implemented over the last ten days, so it will be one of many things to watch this upcoming series. 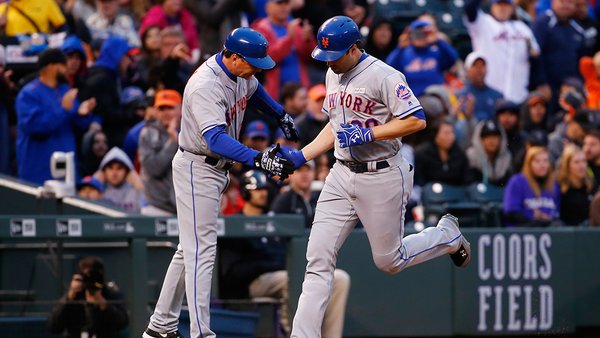 AVOIDING THE BROOMS: After dropping the first two games of this series, the Mets will look to avoid being swept in Colorado for the first time since April 16-18, 2013…The Mets have not been swept this year.

STREAK SNAPPED: This series also snapped a streak of eight straight undefeated series for the Mets…Prior to this series, the last series the club lost was April 11-13 vs. Miami, going 6-0-2…The Mets are now 3-1-3 in road series.

deGROM VS. COLORADO: DeGrom is 2-0 in two career starts against Colorado…He has not allowed a run in 15.0 innings with 19 strikeouts…DeGrom will be making his first career start at Coors Field.

deGROM in deDAY: Jacob deGrom is 13-2 with a 1.25 ERA (19 earned runs/136.1 innings) in 21 career daytime starts…That is the best daytime ERA among qualified major league pitchers over the last three years…It is also the best daytime ERA for any pitcher in his first three seasons in the last 100 years (min. 100 daytime IP).

LOVE THE SUNSHINE: The Mets are 8-3 in day games, including 4-1 on the road this year.

METS VS. CHATWOOD: Tyler Chatwood has made three starts in his career against the Mets and holds a 1-0 record with a 0.56 ERA (1 ER/16 innings pitched)…Chatwood has struck out nine and walked ten…Notable numbers for Mets hitters against Chatwood are provided below… 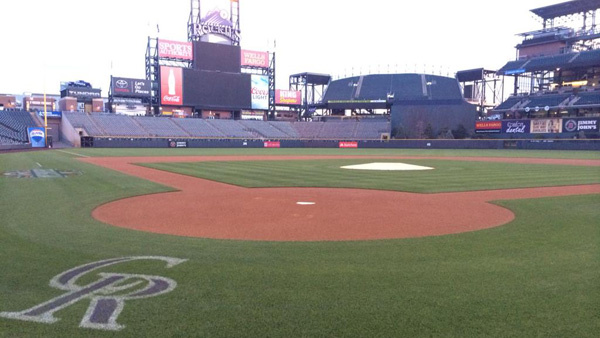 METS AT COORS: Despite winning four straight, the Mets are 9-15 at Coors Field since 2009.

YO BEER MAN: Yoenis Cespedes hit .313 (10-32) with two doubles, four home runs and 10 RBI in seven games vs. Colorado last season, including a three-homer game on August 21 at Coors Field.

JEURYS LOOKING FAMILIA: Jeurys Familia is second in the majors with 12 saves…He is 12-for-12 in save opportunities…Five of his last eight outings have been 1-2-3 innings.

PITCHERS WHO RAKE: According to Elias, the Mets became the first team since the 1963 Washington Senators to have five extra-base hits by pitchers over a five-game span (May 7-11)…This is the first time that two different pitchers (Bartolo Colon and Noah Syndergaard) have hit home runs in the same calendar month in team history.

HAPPY HARVEY DAY: Matt Harvey is 2-0 with a 0.39 ERA (one earned run/23.0 innings pitched) in three careers starts vs. Colorado…Harvey has struck out 19 and walked two…His 0.39 ERA against Colorado is the lowest against any opponent (minimum three starts)…He enters tonight’s game with a 19 inning scoreless streak against the Rockies dating to his first start against them on August 22, 2012…He will be making his first career start at Coors Field…Harvey is 3-1 with a 3.57 ERA (nine earned runs/22.2 innings) over his last four starts.

METS VS. GRAY: Jon Gray has made two career starts against the Mets and is 0-0 with a 9.39 ERA (8 ER IN 7.2 innings)…The 24 year old right-hander has struck out five and walked three…Gray’s inflated ERA against the Mets is due to the Mets scoring seven runs on eight hits in 1.2 innings back on August 21 2015 at Coors Field against Gray…Gray was selected in the first round with the third overall pick by the Colorado Rockies back in the 2013 MLB Draft out of the University of Oklahoma…Notable Mets numbers against Gray are provided below…

There are certain players that I have not grown fond of the Mets facing over the past several seasons, and I tend to call them Mets killers. These individual players are always having success against the Mets no matter how their individual season is going. What is even more frustrating is for the life of me I can’t figure out ways to get them out sometimes or I know the inevitable is about to happen in a high leverage situation. I listed some notable Mets killers on the season schedule this season that the Mets will be facing. I have provided stats for each player against the Mets and how those statistics translate to other teams in the league. To qualify for the list each player has to have played in at least 20 games against the Mets, and some teams have multiple players included on the list. Pictured is the all-time Met killer Chipper Jones, because nobody would be more appropriate to headline this article, right? END_OF_DOCUMENT_TOKEN_TO_BE_REPLACED