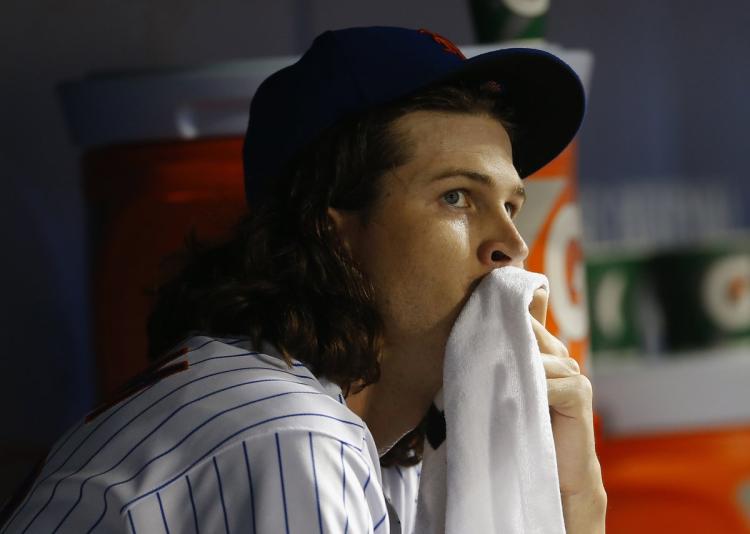 The New York Mets announced prior to tonight’s contest against the Minnesota Twins that starting pitcher Jacob deGrom will not make tomorrow’s scheduled start, and he has been ruled out for the remainder of the season. DeGrom is a candidate to undergo surgery to correct an unlnar nerve in his right elbow.

It’s a big blow to the Mets rotation as the team was expecting deGrom back tomorrow, and he was expected to be relied upon as a big part of the Mets postseason push. DeGrom has not pitched since September 1st due to issues with his forearm/elbow. Now the Mets are left with more questions than answers in regards to how their rotation will hold up for the rest of the season, and possibly postseason. Both Seth Lugo and Robert Gsellman have filled in admirably, and they will now be relied upon to fill a much larger role than initially expected as the Mets have their eyes set on the postseason.

The good news is that deGrom will be expected to be ready for Spring Training next season, and that he doesn’t have any ligament damage in his throwing arm. The Mets will now hope that Steven Matz, who is attempting to make his way back to the rotation, can help provide the rotation with stability down the stretch. It’s a fair question to wonder if the 216 combined innings last season played a part in deGrom’s uneven season. Regardless you can’t forecast injuries and this season the Mets have just been decimated by them.

Right-hander Gabriel Ynoa will make the start tomorrow afternoon against the Twins in deGrom’s place.