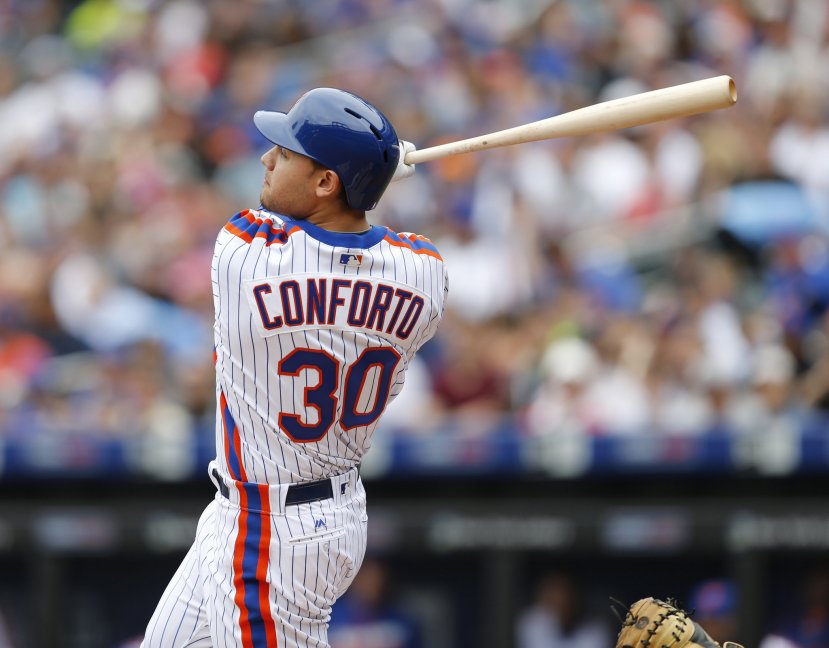 The Mets have recalled outfielder Michael Conforto, catcher Kevin Plawecki, utility player Ty Kelly, and pitcher Gabriel Ynoa in their first wave of their September roster expansion. The Mets will have one more wave of players recalled sometime next week after the Triple-A Las Vegas season comes to a close.

The Mets brought back several familiar names to the roster, but none more interesting than outfielder Michael Conforto. Conforto has had his moments in the big leagues, but this season he has not been able to put it all completely together. The 23-year old outfielder is still highly regarded in the organization and around the league as well, as many teams were trying to pry him away during the Trade Deadline. At the Major League level Conforto hit .218 with 11 home runs and 33 RBIs. He also had a lowly .297 OBP. He has ripped the cover off the ball down in Las Vegas however with a .422 average and nine home runs and 28 RBIs. It is going to be interesting to see how Terry Collins divides playing time in the Mets crowded outfield, but any production out of Conforto down the stretch will be a bonus.

Kevin Plawecki is another name who many Mets fans know very well. The 25-year old catcher has raked through the minors in his career, but has yet to put together a solid offensive game at the Major League level. Plawecki has been a career .210 hitter in the Majors over the past season and a half, while only hitting .194 for the Mets this season. While it appears the Mets aren’t entirely sold on Travis d’Arnaud being their catcher of the future, Plawecki will have a chance to draw a handful of starts in September depending on how effective he is when given a chance. If Plawecki can display growth since his demotion  to Las Vegas in June, he will certainly be in the conversation for a roster spot next spring.

Ty Kelly who has lit the Pacific Coast League on fire this season, will see time all over the diamond in September, but most importantly he may see most of his time at second base now that Neil Walker is lost for the season. Wilmer Flores is expected to draw the majority of starts at second, but I wouldn’t be surprised to see Kelly draw some starts at second base as well. In 48 at-bats for the Mets, Kelly has hit .250 with one home run and six RBIs.

Gabriel Ynoa will primarily pitch out of the bullpen for the Mets. The 23-year old right-hander has made three appearances out of the Mets bullpen this season, and holds a 12.00 ERA. In his last appearance back on August 17 against Arizona, he allowed three runs in an inning of work which is the reason for the inflated ERA. Ynoa is ranked as the Mets 18th best prospect according to MLB.com.