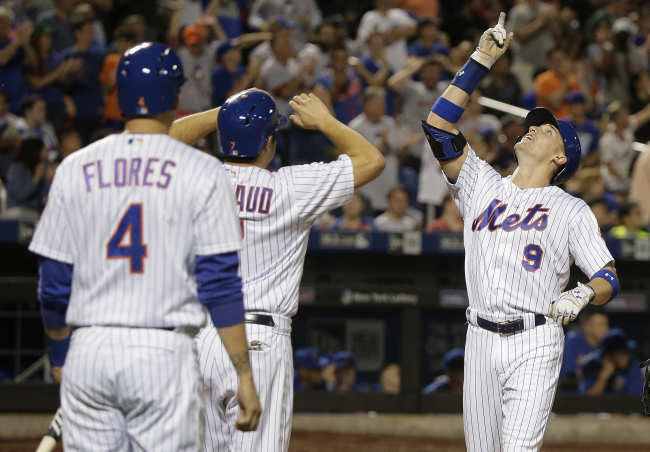 New York Mets right fielder Brandon Nimmo (9) reacts as he crosses the plate after hitting a three-run home run against the Chicago Cubs during the fourth inning of a baseball game, Friday, July 1, 2016, in New York. (AP Photo/Julie Jacobson)

The Mets look to be regaining their swagger back. Two night’s ago behind a solid pitching performance they scrapped for runs by any means possible. Last night we saw the type of Mets club that had been dominating back in April. The Mets slugged a Citi Field record five home runs, and Jacob deGrom pitched a great game against one of the best offenses in baseball. The Mets bullpen followed with four innings of 1-run ball and never gave the Cubs much of a chance to make it a ballgame again.

Brandon Nimmo has done nothing but become a jolt of energy in the Mets dugout over the past several days. Nimmo’s infectious smile and his grind it out approach have seemed to lighten the mood both on and off the field for the Mets. Nimmo is making a case to stay on this ballclub for the long run with the way he is swinging the bat and playing defense in the outfield. Let’s hope he can keep it up because the Mets will have two great sparkplugs on this team, with both Nimmo and the soon to be recalled Jose Reyes.

This is as dominant of a win we have seen the Mets have lately, and it was a great way to turn the page on an uneven June and start a new chapter in July. Yes the Mets are still a season-high six games behind the Nationals, but this ballclub looks to be playing with a sense of urgency that seemed to be lacking over the past couple of weeks. The Mets just have to continue to take it game-by-game and if they can continue this run they have started, the Mets will certainly have their opportunities before the All-Star break to get revenge on the Nats. Let’s keep the momentum going into tonight and let’s go Mets!