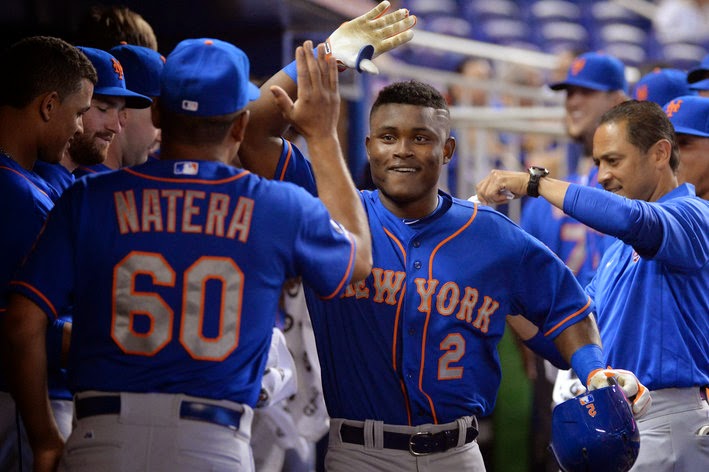 Could Dilson Herrera possibly force the Mets hand this spring? Herrera’s spring start has gotten off as well as he could’ve expected, and he is making every case to head back up north with the big club next month. Unfortunately for Dilson there are a lot of other moves that need to be made for him to make the club straight out of Spring Training.

Herrera has long been regarded as the Mets second baseman of the future since he was acquired from the Pirates with Vic Black in July of 2013, for Marlon Byrd and John Buck. Herrera has absolutely raked at every level of the Minors he has played at, as he has a career Minor League line of .304/.369/.470. He also has robust OPS of .839 in the Minors. Herrera has flirted with the big leagues in 2014 and 2015 with mixed results. For his career in the Majors he has a .215 average to go along with 6 HR’s and 17 RBI’s. Not the eye-popping numbers he had in the Minors, but he has shown that his pop will translate to the Major League level. We also need to remember that Herrera just turned 22 years old last week. While he is ineligible for prospect lists due to his Major League service time already accumulated, if Herrera were eligible he would be listed as a top-3 prospect in the Mets system right now. ESPN’S Keith Law has already mentioned in the past that Herrera is a future All Star in the making. I believe Herrera is capable of being a .300 hitter at the Major League level and can hit around 15 home runs a season. Neil Walker will be a free agent after this season, and it is widely expected that the future second base job will be Herrera’s to lose.

As for the present there are a lot of things that will need to break Herrera’s way. Ruben Tejada’s job security has been speculated on as of late, and if he were to be released or traded before Opening Day, that could open up a spot for Herrera. The only issue is that Herrera is limited in the field to second base only. The Mets may be better served to use Matt Reynolds or Eric Campbell who both can play multiple positions in the field, if Tejada indeed were let go. Herrera is also expected to leave the team for several days this month to play in the WBC qualifiers for Colombia. With Herrera not in camp it will be tough for the Mets coaching staff to continue to evaluate his growth firsthand. The last factor that plays against Herrera would be the question, if Herrera riding the bench this season for the Mets would hurt his development? There is talk of sending Kevin Plawecki back down to AAA to start the season to continue to his development by him playing everyday in Las Vegas. Herrera would not be playing everyday with the big club, and it may be best for Herrera to continue to receive at-bats in AAA this season.

However, there is not much left for Herrera to prove at the Minor League level, as he slugged .327 with 11 HR’s and 50 RBI in 81 games last year. At the same time there is not much room on the big league roster, and he may be forced to play one more season at the AAA level to continue his development. But if Herrera keeps up his torrid pace this spring the Mets will have a tough decision on their hands to make, as Herrera is proving to everyone that he is Major League ready.