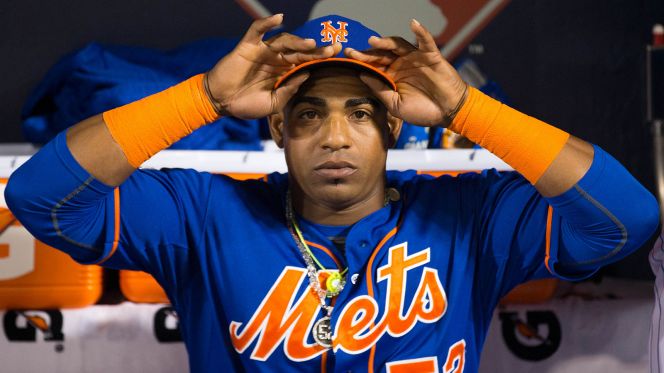 It is being reported by FOX Sports baseball insider Ken Rosenthal that the New York Mets have come to terms on a deal with free agent outfielder Yoenis Cespedes. The deal is reportedly going to be the biggest free agent deal in Mets history.The reported specifics detail Cespedes receiving a four-year $110 million deal. The deal will pan out to an average of $27.5 million dollars a year for the 31-year old slugger. While the amount isn’t as nearly as surprising, the length of the contract certainly is. It was being widely reported that Cespedes was looking for a five-year contract on the open market and teams such as the San Francisco Giants and Washington Nationals were lurking in the background. Cespedes will receive full no-trade protection and is only behind Tigers first baseman Miguel Cabrera in terms of annual average salary for a position player in MLB history. Cespedes will however hold the top annual average salary ever for any outfielder with this deal.

It is a big get for Sandy Alderson and company as they look to return to the World Series after last year’s Wild Card round elimination. The Mets have not had an impactful bat in their lineup since Carlos Beltran, and Cespedes has proven to be that and more over his season and a half with the team. He has fully embraced New York and New York has fully embraced him. In 189 games played for the Mets since coming over during the 2015 MLB Trade Deadline Cespedes has hit .282 with 48 home runs and 130 RBI’s.

Now that this deal has been completed, the Mets can focus their attention in other directions in regards to improving the roster. Jay Bruce is highly likely to be traded after this signing and it will be interesting to see what the Mets will want in return. There had already been speculation earlier this month that both the Blue Jays and Mets were talking about a deal involving the 29-year old outfielder. The hot stove is getting hotter with the Winter Meetings around the corner, and the Mets for the first time in quite some time dug deep in their pockets to get their guy.