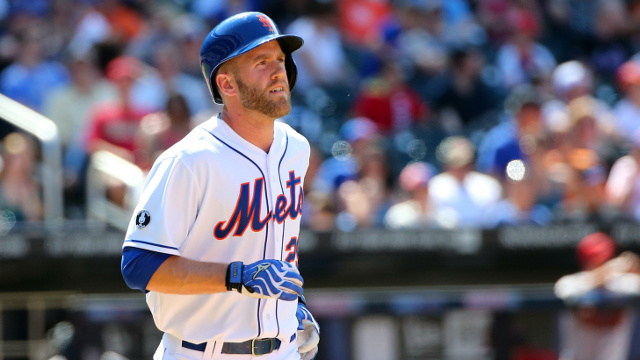 The New York Mets have outrighted both utility player Eric Campbell and reliever Jim Henderson off of the 40-man roster after both players cleared through waivers. It’s a move that doesn’t come as much of a surprise as both Campbell and Henderson struggled this season for the Mets, despite the latter player beginning the season strong.

Eric Campbell hit .173 with one home run and nine RBI’s for the Mets this season in 75 at-bats. While it wasn’t a huge sample size, the Mets have seen plenty of Campbell over parts of the past three seasons to know what they had. The 29-year old has been a career .221 hitter during his three seasons with the big league club, although he has been known to tear the cover off the ball in a hitters heaven, also known as Triple-A Las Vegas. He is a career .322 hitter over four seasons in Triple-A. Campbell more likely than not will elect minor league free agency, and will look to either latch back on with the Mets, or compete for a spot on another organization’s bench. While Campbell has the versatility to play all over the diamond, his bat never could quite catch up to Major League pitching, despite his impressive 2014 campaign where he posted a .263 average.

Jim Henderson came on strong for the Mets in Spring Training back in March, as he made the ballclub on a low-risk minor league deal. Henderson got off to a hot start as he posted a 1.08 ERA over twelve appearances in the first month of the season. However he could not stay healthy and ultimately would be hurt by ineffectiveness as the season wore on. The 29-year old reliever ended the season with a 4.37 ERA, while also being sidelined for two months with bicep tendinitis and a hamstring strain. The former Brewers closer will look to latch on with another organization on a minor league deal after his disappointing 2016 campaign.