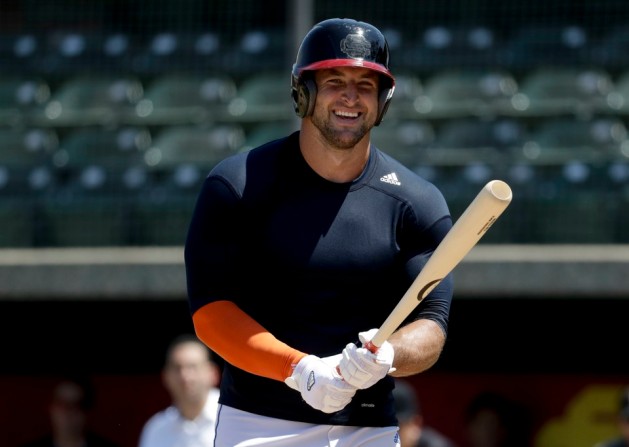 Former NFL quarterback, Tim Tebow smiles during a work out for baseball scouts and the media during a showcase on the campus of the University of Southern California, Tuesday, Aug. 30, 2016 in Los Angeles. The Heisman Trophy winner works out for a big gathering of scouts on USC’s campus in an attempt to start a career in a sport he hasn’t played regularly since high school. (AP Photo/Chris Carlson)

The biggest story of the day regarding the New York Mets, actually scratch that. The biggest story in baseball today is the Mets officially signing former NFL quarterback Tim Tebow to a minor league deal. No we aren’t talking about the Mets being tied for the second NL Wild Card spot and a half game behind the San Francisco Giants for the first Wild Card spot, after yesterday afternoon’s victory. Today’s big talking point is the Mets signing a former NFL quarterback to play in their Instructional League this fall. And quite frankly I’m ok with that.

I may be a bit biased as I’m originally from Florida and I grew up a HUGE Florida Gators fan. I’ve also been a HUGE New York Jets fan my whole life, so I’ve seen my fair share of Tim Tebow, both good and bad. Do I agree totally with the move? Sure why not. The Mets are taking a flyer on one of the greatest athletes in sports, to see if his tools can translate to a baseball diamond. Yes I understand Tebow hasn’t played baseball since his junior year in High School back in Florida, so there is no telling how his skills will indeed translate. But GM Sandy Alderson, who is a hard man to sell, obviously saw something intriguing in Tebow during his workouts.

The hard selling Alderson had some great things to say about the former quarterback during today’s conference call.

“Any player evaluation starts with tools,” stated Alderson. “From that standpoint, without grading everything out, suffice it to say Tim has been a great athlete. He has demonstrated more than rudimentary baseball skills. We think, with his commitment to success, that this is an opportunity that is worthwhile.”In terms of power, in terms of arm, in terms of foot speed, all of those things, we think he can be a baseball player. I think that is underscored by his competitiveness and his determination to succeed and to improve. From our standpoint, this is another opportunity for us to develop a player and see where it goes. We understand most players don’t make it to the Major Leagues.”

Tebow will report to the Mets Instructional League in 10 days to begin his baseball journey. The odds are certainly stacked against the 29-year old, and he won’t do himself any favors missing time during the Instructional League to fulfill his SEC Network obligations. There is always the option that the Mets have Tebow play winter ball or in the Arizona Fall League to get reps in a regular game environment. If Tebow is still with the team heading into February of next year he will head to Spring Training with the Mets. It’s highly unlikely he gets a big league invite and he’ll most likely be in Minor League camp playing on the back fields. The odds of Tebow having an impact at the Major League level this season are zero, and the odds of him having an impact next season are pretty close to zero. This will be a process for Tebow as he will have to ascend through the ranks of the Minor Leagues and there is no guarantee he will make it above Low-A ball.

“It’s something I’ve committed to do.” Tebow said during the conference call. “For me, when I commit to do something, it’s my word. It’s more than a contract, because it’s my integrity and it’s who I am. During the week, I’ll be training as hard as I can. Like Mr. Alderson said, you’ve got to take a break every now and then. One day a week will give me a chance to rest up and get back at it the next day. I don’t really view it as not taking this seriously. Then again, I don’t have to listen to listen to what everybody else says. I just get to go and do what I said I was going to do. I’m going to pursue this with everything I have.”

Those are the fighting words of a man who knows nothing is going to be given to him while he is under contract with the Mets. Tebow certainly will play with a chip on his shoulder, but he is not going to come into any locker room and believe he is the number one guy. While Tebow may have been that guy in the past, I’m sure he understands he’s entering unfamiliar waters and he’s not going to step on players toes who have been doing this their entire lives.

Did the Mets make this move to satisfy Tebow’s agency that also represents Yoenis Cespedes? Who knows. But what I do know is that the Mets invested in an athlete that will give everything he has to be the best, as he holds his own reputation in high regard. The Mets will certainly sell some Minor League tickets wherever he ultimately ends up playing. He will also provide leadership and a quality work ethic to his teammates, which is a win in itself. Whether he ever steps foot on a Major League diamond remains to be seen, but I don’t see anything negative coming out of this low risk deal, besides people overreacting to something that probably will never affect the Mets big league club.

And for Tim’s sake, even if he never makes it to the Majors I hope he proves everyone who doubts he can hit and field a baseball wrong.