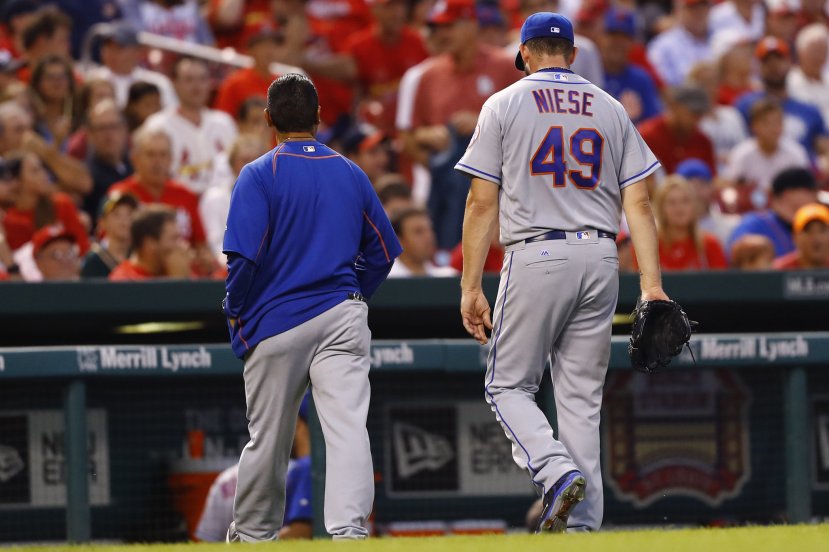 The Mets have placed left-handed pitcher Jon Niese on the 15-day DL with a left knee injury that has not been exactly diagnosed at this point. In a corresponding move the Mets recalled recently demoted right-handed reliever Erik Goeddel.

Niese who is having a season to forget lasted only a third of an inning last night before departing with the knee injury after feeling a “pop.” The knee has been bothering Niese for sometime and it certainly has become a question as to why Manager Terry Collins let an injured Niese pitch in a critical game last night. With all due respect, Niese isn’t on the level of Jacob deGrom or Noah Syndergaard, and to me it wasn’t a good idea to put a pitcher who has been ineffective this season on the mound with an injury that has been well known for quite some time. As a matter of fact Niese has been dealing with knee pain since his time with the Pirates but it seems to only have gotten worse as the season has wore on. In 11 innings pitched thus far, Niese has produced a 0-1 record with a 11.75 ERA since being acquired by the Mets. It is not known how long Niese will be sidelined as there has been no official diagnosis reported in regards to his knee. Robert Gsellman will occupy his rotation spot after picking up his first career victory last night.

Goeddel will give the Mets a fresh arm in the bullpen after the Mets used six pitchers in relief last night. In 28 innings for the Mets, the 27-year old has produced a 4.18 ERA with 27 strikeouts.