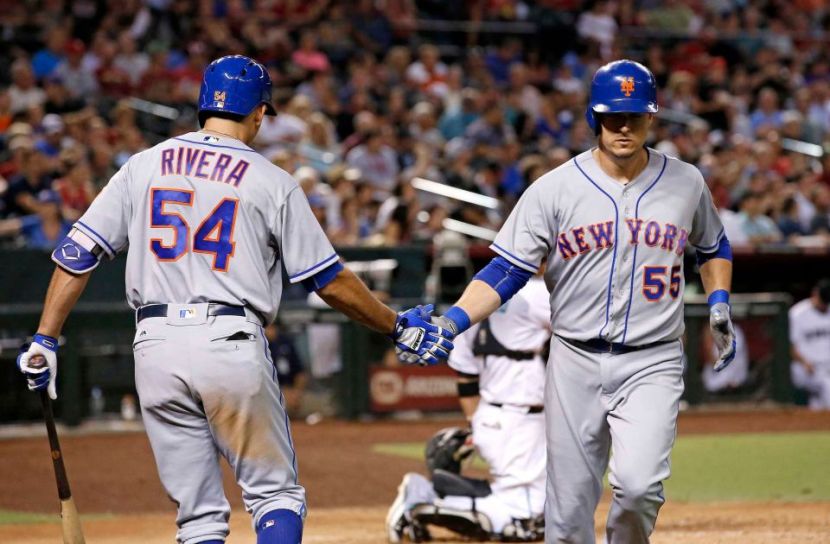 METS-DBACKS NOTES: The Mets are 8-4 since 2013 in Arizona and 35-29 all-time…Last night’s win snapped a four-game losing streak to the DBacks.

NIESE RETURNS: Jonathan Niese will make his first start of the year for the Mets tonight…He was 7-6 with a 5.13 ERA (58 ER/101.2 IP) in 18 starts with Pittsburgh this year…He was acquired on August 1 in exchange for LHP Antonio Bastardo…Niese’s last start for the Mets came on September 21, 2015 vs. Atlanta, when he tossed 6.0 shutout innings…Tonight will be his 178th start with New York, which ranks 10th in franchise history.

BACK-TO-BACK 40: Jeurys Familia earned his major league- leading 40th save last night…He tied a franchise record with 43 saves last year…The only other Mets reliever to post back-to- back 40 saves seasons was Armando Benitez (41 in 2000 and 43 in 2001).

PITCHER’S POWER: New York has four homers from its pitching staff this year (3 by Syndergaard and 1 by Matt Harvey), the most in the majors.

THOR’S HAMMER: Noah Syndergaard hit his third home run of the year last night…He also went deep twice on May 11 at Los Angeles-NL..The three homers are tied for the most in franchise history in a single season by a pitcher with Tom Seaver (1972) and Walt Terrell (1983)…The three homers are the most in the majors this year by a pitcher…Syndergaard has four career homers which already ranks third in team history behind Dwight Gooden (seven) and Tom Seaver (six).

NIESE VS. D-BACKS: Niese made three appearances (one start) against the Diamondbacks this season as a member of the Pirates and Mets…Is 1-0 with a 12.86 ERA (10 earned runs/7.0 innings pitched) in those three appearances and has struck out four and walked five…His lone start came in Arizona with the Pirates on April 22… Earned the win in Pittsburgh’s 8-7 win over the Diamondbacks…Pitched 5.1 innings, gave up four runs, earned, on 10 hits while striking out two and walked two in the 95-pitch effort…In 10 career games (eight starts) against the Diamondbacks, Niese is 4-3 with a 6.94 ERA and has struck out 36 and walked 14 in the 10 appearances.

METS VS. GODLEY: The 26-year old right-hander is making his first career start against the Mets…Pitched a scoreless inning of relief back on August 11th at Citi Field and allowed no hits.