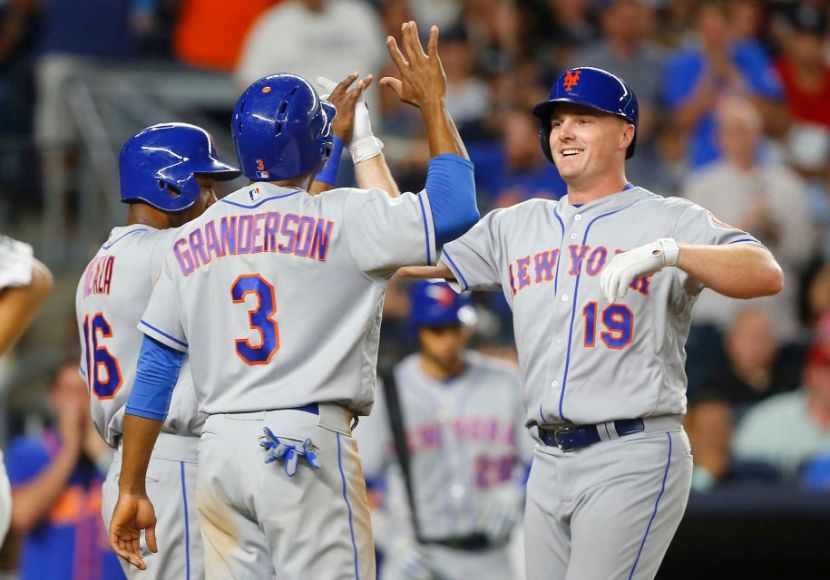 The New York Mets and New York Yankees respectively split their four game series that saw them play two games each at each others home ballparks.

Game one at Citi Field was a back and forth affair that ultimately broke Mets fan hearts in extra innings, although questionable bullpen moves by manager Terry Collins played a part in the loss. I did not understand starting the top of the eighth inning with Jerry Blevins and then removing him for Addison Reed. I understand Collins was trying to play matchups, but the eighth inning has belonged to Addison Reed all season and he should’ve been put in there to start the inning. With the Mets leading by a run in the top of eighth the Yankees would score two runs to tie the game. The Mets did have a chance to come back in the bottom of the tenth as they had the tying and winning runs on base, but Rene Rivera grounded out to the pitcher and Curtis Granderson ended up striking out to end the game. Mets lost 5-4.

Game two saw a Mets team on the attack as they pounced on the Yankees early with a two-run homer by Alejandro de Aza and a solo home run by Travis d’Arnaud. That is all they would need as a strong pitching effort by Jacob deGrom would carry them for seven innings. The Mets would tack on four runs in the bottom of the seventh inning and put the game out of reach. This performance was reminiscent of the Mets we had seen earlier in the season both offensively and on the mound. Since the All Star Break deGrom has pitched to a 1.69 ERA in four starts and his velocity has returned from where it was earlier in the season. The Mets are going to rely on deGrom to get them back to the postseason. Mets win 7-1.

Game three saw the series shift to Yankee Stadium and while the game got off to a promising start as the Mets took a early 2-0 lead, it would be a frustrating game to watch the rest of the way. After the early 2-0 lead the Yankees would score three in the bottom of the first, but the Mets would tie them up in the top of the second inning. With a 3-3 tie heading into the bottom-half of the inning Mark Teixeira would slug a three-run home run that would give the Yankees a 6-3 lead they would never relinquish. While Steven Matz did give up six runs for his second worst start of the season, he would settle down and give the Mets four scoreless innings to keep them in the game. Drama also surrounded this game as Matz would hit Teixeira in the shin with a pitch in his next at-bat and the benches cleared as Teixeira acted as if it was a purpose pitch. Teixeira also would get into it with reliever Hansel Robles, as Robles believed Teixeira was stealing signs. The Yankees tacked three extra runs on Robles for good measure and this game would be out of reach for the Mets as their offense struggled to drive in runs all night, aside from the first two innings. Yankees win 9-3.

Game four wasn’t short on drama either, as all the headlines heading into last night surrounded Yoenis Cespedes and him golfing while injured. But ultimately there was a game scheduled to be played and the Mets showed up to play. Bartolo Colon brought a veteran presence to the mound and mowed through the Yankees lineup for 6.2 innings while only allowing one run on six hits. The top of the fifth inning would be the inning the Mets won this game behind a leadoff home run by Kelly Johnson and a three-run bomb by newly acquired Jay Bruce. The Mets would take a 4-0 lead and the Yankees scored once the rest of the way. Jeurys Familia had another shaky ninth inning as he put the tying run at the plate with one out, but ultimately got a double play to end the game and gave himself his 38th save of the season. Mets win 4-1.

The Mets are only one game out of the final Wild Card spot as they head to Detroit to face a red-hot Tigers team. It will be an interesting interleague series this weekend as both teams are in the middle of the playoff picture. The Mets offense is certainly going to be challenged this weekend and over the next two weeks without Cespedes, but they have the pitching to get it done. Let’s hope Bruce’s big night last night is a preview of more to come down the final stretch of the season. Let’s keep believin’ Mets fans!