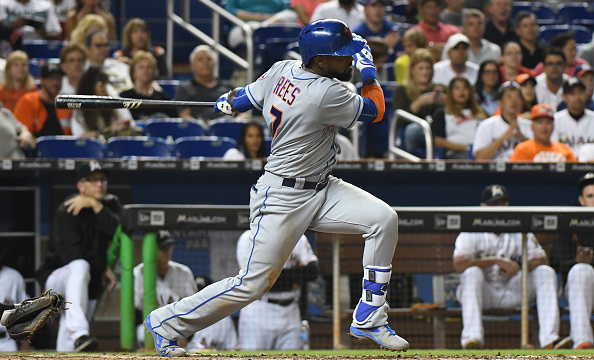 Last night Jeurys Familia had to tip-toe out of trouble to convert his 34th save of the season, as well as his 50th regular season save in a row dating back to August of last season. After a Yoenis Cespedes misplayed a fly ball with the first batter of the inning, Familia danced around danger for the remainder of the ninth inning. Familia allowed one run, but with the winning run at the plate, Familia secured the save with a ground out by Adeiny Hechavarria to short. Familia passed John Axford for fourth on the straight saves list with his 50th straight save last night and becomes only the fourth pitcher to convert 50 straight saves since the save rule was made in 1969. Familia would need five more straight conversions to pass both Tom Gordon and Jose Valverde’s 54 straight conversions for second place all-time. While most times the saves haven’t been pretty, Familia seems to thrive when the pressure is big, and he has been nothing short of dominant when it comes down to locking down the ninth. In fact in 17.2 high leverage innings this season batters have a .179 average against the 26-year old closer according to FanGraphs.

Jose Reyes had a coming out party in his return to Miami for the first time last night, and showed what kind of threat he can be at the top of the lineup when he is on his game. Reyes turned back the clock last night and went 3-5 with a double, a stolen base, and two runs scored. This is the kind of production the Mets are expecting out of Reyes for the rest of the season out of the leadoff spot, and he showed up big tonight against his former team. I still believe Reyes has plenty left in the tank and he has shown glimpses of it on some nights. It is just a matter of consistency for Reyes and I think he’ll find himself in a groove sooner than later as you have to remember this was a guy who just started facing Major League pitching 13 games ago after sitting out half of the season.

What a clutch home run by James Loney in the top of the ninth inning. Loney’s two-run shot gave the Mets a three-run cushion and provided Familia enough rope to secure the save tonight. Loney has been nothing short of a great addition by General Manager Sandy Alderson as he has provided great defense and he has done well with the bat in his hands as well. Loney is currently hitting .287 and surpassed last season’s home run total of four, with his fifth home run of the season last night. Loney only had four home runs in 361 plate appearances last season, and now has five in 157 plate appearances this season. Loney is not known as a power threat as the most home runs he has ever hit in a season was 15 back in 2007 with the Dodgers, but maybe hitting coach Kevin Long has unlocked something with Loney’s swing that is allowing him to hit for more power.

The Mets got a huge win last night and now sit a half-game games behind the Marlins for second in the NL East and a half-game behind the Marlins and St. Louis Cardinals for the final NL Wild Card spot. Tonight’s pitchers duel between Jacob deGrom and Jose Fernandez is all that it is advertised to be, and the Mets will look to leap over the Marlins in the standings tonight.