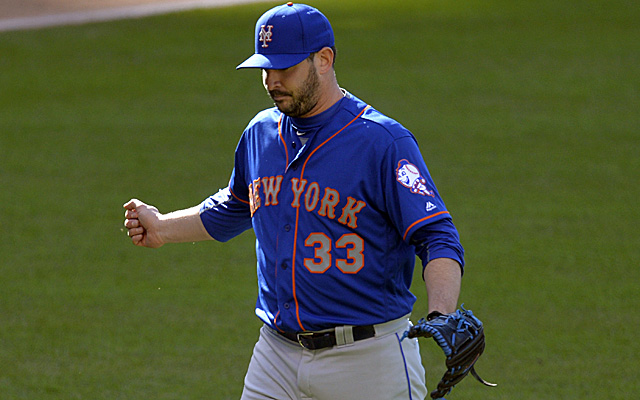 Agent Scott Boras earlier today disclosed that his client Matt Harvey would be undergoing surgery to correct the thoracic outlet syndrome in his throwing shoulder. Harvey is expected to miss the rest of the 2016 campaign but he should be ready to roll when next season rolls around.

Dr. Robert Thompson will perform the operation on Harvey sometime next week in St. Louis and the Dark Knight will be required to rehab over the next six months to return back to full health. In order to correct Harvey’s issue, Dr. Thompson will actually remove one of his ribs to alleviate the compression on the impacted nerve, which will in turn bring back the feeling in his throwing arm and fingers.

Harvey had been dealing with symptoms as early as Spring Training when he was experiencing numbness in his pitching hand, but tried his best to gut it out, and it may have just made the situation in his shoulder worse. Harvey recently told manager Terry Collins after his last start, “My shoulder’s dead. My arm’s dead. There’s no energy there. I couldn’t feel the ball.” This could be the reason Harvey was having such a bad season.

It’s a disappointing end to what has been a disappointing season for the 26-year old pitcher who finishes the season with a 4.86 ERA and has seen his strikeout rate dip (7.4 K/9) along with his average fastball velocity. This type of operation has provided a mixed-bag of results and there is no guarantee that Harvey will return to his All-Star form, although both Harvey and his agent Boras both believe he will. If there is one person I won’t bet against it is indeed Matt Harvey, and we wish him a successful operation and recovery.

In the mean time Logan Verrett (3-5, 4.01 ERA) will slide into Harvey’s rotation spot, and make his first scheduled start in place of Harvey tomorrow night. The expectation is that Verrett will hold down the rotation spot adequately, until Zack Wheeler is activated off of the disabled list sometime in the middle of next month, provided he has no more setbacks. The Mets could also turn to Seth Lugo who was recently recalled or a host of other pitchers they have in Triple-A Las Vegas such as Sean Gilmartin, Rafael Montero, or Gabriel Ynoa. It is also hard to not rule out a trade for a pitcher if the Mets don’t like what they have from the fifth spot and Wheeler doesn’t progress in his rehab.

The Mets still have a postseason roster with or without Harvey this season, and the Mets record with Harvey on the mound this season was just 6-11. If they could improve that record to about .500 with Verrett or another starter they will be just fine.