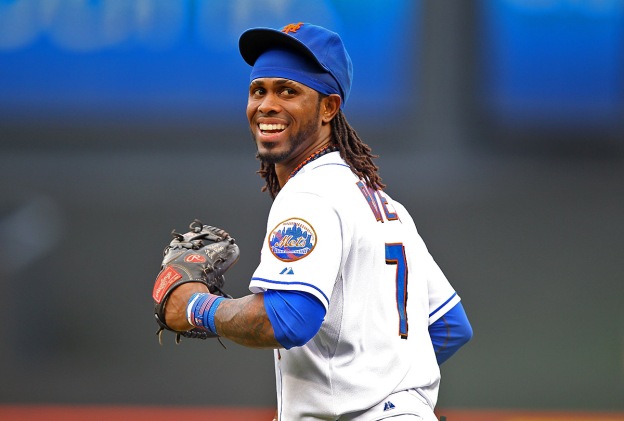 Jose Reyes as expected, has been activated prior to tonight’s game, and is in the starting lineup, batting leadoff and starting at third base for the first time in his career. Infielder Matt Reynolds has been optioned back to AAA Las Vegas in a corresponding move. Third baseman David Wright has also been transferred to the 60-day DL to make room for Reyes on the 40-man roster.

Reyes was 6-34 (.176) with six runs scored and two RBI in 11 games between Binghamton (AA) of the Eastern League and Brooklyn (A) of the New York-Penn League. Reyes was signed to a minor league contract by the Mets on June 25 following his release from the Colorado Rockies. Reyes hit .274 with 25 doubles, seven home runs and 53 RBI in 116 games between Toronto and Colorado last year.

Reyes who came up with the Mets back in 2003, played for the Mets until 2011 before departing as a free agent to the Miami Marlins. Reyes is the franchise leader in stolen bases (370), triples (99) and ranks third in hits (1,300) and second in runs (735). It also has been announced that Reyes will wear his customary #7, and Travis d’Arnaud will switch his number to #18.

It is expected that Reyes will primarily play third base, although Terry Collins suggested prior to tonight’s game that Reyes could possibly see time in center field as well. All in all Reyes can provide much-needed speed at the top of the lineup for a Mets team that is devoid of it. Reyes also seems to be rejuvenated to be back in New York, and he has taken one of the best approaches towards addressing his domestic violence incident compared to many other athletes who have been in the same situation.

It is a great low risk addition for a Mets ballclub who has struggled with speed on the bases, and there is nobody better to take a flyer on than one of the greatest Mets players of all time.