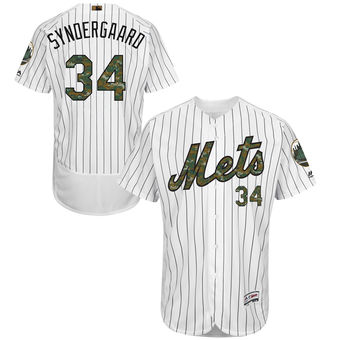 Today’s game can be seen on SNY and ESPN.

SPECIAL UNIFORM: The Mets will wear specially-designed jerseys that incorporates camouflage in the Mets logo and numbers and can be seen in the picture above…The Mets will also wear a special camo NY hat…Authenticated items from today’s game will be auctioned off at MLB.com/Auction to benefit Welcome Back Veterans.

LIVE BY THE LONG BALL: The Mets have 71 home runs through their first 49 games, which is the most in team history after 49 games…Overall, the Mets lead the majors with 71 homers…The Mets are 24-10 when they hit a homer.

HARVEY VS. WHITE SOX: The only time Matt Harvey faced the White Sox he was perfect for 6.2 innings before Alex Rios had an infield single…It is tied for the third-longest streak in team history…Harvey allowed one hit over 9.0 shutout innings and had 12 strikeouts…He had a no-decision in a game the Mets won, 1-0 in 10 innings.

JUAN IS ON FIRE: Juan Lagares is 6-for-his-last-15 (.400) with two home runs and four RBI…Lagares is hitting .333 with one home run vs. lefthanders this year, and has batted .285 with nine home runs vs. lefties during his career.

METS VS. QUINTANA: Jose Quintana originally signed with the Mets as an international free agent back in 2006 out of Colombia and pitched in the rookie Venezuelan Summer League…He did not play in 2007 as he was suspended for violating the terms of minor league baseball’s drug policy and subsequently released..He has never faced the Mets in his career…Below are Mets career  numbers provided against the 27-year old left-hander…