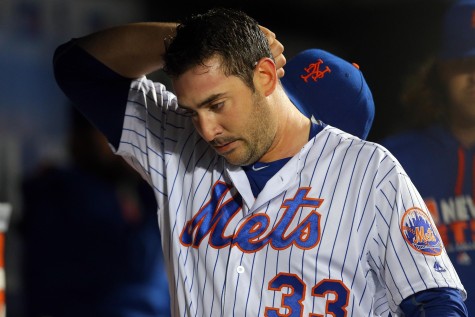 The Washington Nationals (28-18) defeated the New York Mets (26-19) this evening by the final score of 7-4. For a full boxscore recap follow the link below…

I really wanted to see Matt Harvey put together a promising result tonight and unfortunately it just didn’t happen. The Nationals took Harvey deep three times tonight, and Nats hitters went 3-5 once they saw Harvey the third time around. The fourth through sixth innings continue to rattle Harvey as he currently holds an ERA of 9.89 between those three innings this season, and that is where the damage occurred tonight. To me it looks like Harvey’s confidence is completely shaken more than anything at this point. With tonight’s outing he allowed more baserunners than he ever has in his career with 20, and his ERA continues to climb as it hit 6.08 after tonight’s start. It was also the first time in his career that Harvey failed to strike out more than one batter. It’s getting to the point that you have to wonder where is rock bottom for Harvey? You keep thinking he can’t get any lower after each start, but then it doesn’t seem to get much better after that. An amazing stat I stumbled across tonight from the Elias Sports Bureau stated that Harvey’s ERA is the highest by a Mets pitcher through 10 starts of a season since Dillon Gee had a 6.34 ERA in 2013 . That is a number that Harvey I’m sure never expected to see in his career. I hope Matt can get it together, as it is painful to watch his season continue to unravel at a historically bad pace. At this point you just want to see some sort of progress with Matt, and it remains to be seen what Terry Collins next move will be regarding his status.

The Mets ran into a red-hot Stephen Strasburg who is putting together one of the better seasons of his career thus far. He is going to be tough to beat this year, and whoever is on the mound for the Mets against him is going to have to pitch just as well, if not better than Strasburg if they want to beat him. Steven Matz who has been as good of a pitcher as anybody in the league this year will have a shot tomorrow afternoon to lead the Mets to a series victory, and put them a half-game out of first place again. The Mets should forget about this one quickly because we have one more heavyweight round left tomorrow afternoon!