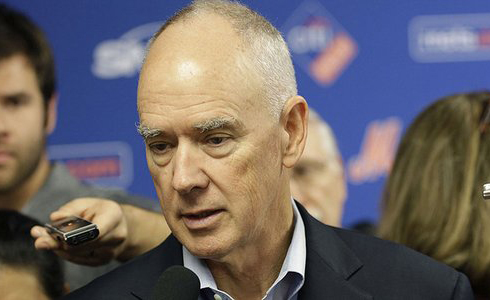 The Mets currently plan to ride with a combination of Wilmer Flores and Eric Campbell at first base in place of the injured Lucas Duda. If things don’t go according to plan, the team may be forced to explore external options. I don’t believe if the Mets made a move it would be a franchise-altering move such as trading for Freddy Freeman or taking on a player with a big salary. I believe they would explore a cheap stop-gap option to fill the role until Duda is healthy, and would allow Flores to return to his super-utility role. A few external options are provided below as to who may interest the Mets in helping replace Duda’s bat in the lineup.

1B Chris Carter Milwaukee Brewers: Carter was signed cheaply by the Brewers in the offseason to a one year $2.5 million deal and has become a productive bat in the middle of their lineup. Carter has hit .247 with 13 home runs and 31 RBI’s in 150 at-bats. Carter profiles similarly to Duda and it should not cost the Mets too much as he would be a rental player for the Mets. The Brewers are expected to be sellers at the deadline and Carter may be one of their most appealing assets.

3B Martin Prado Miami Marlins: Mets killer Martin Prado could be an option for the Mets if they wanted to move him to first base. Prado has experience of playing first base back with the Atlanta Braves. Depending on whether the Mets wanted to make a deal with a division rival, he shouldn’t be an expensive option as he is in the final year of his contract. Prado wouldn’t provide a power threat in the Mets lineup, but he is an on-base machine, registering a .353 average this season, and rarely strikes out as he only has 13 on the year. The Marlins consider themselves as contenders this year, but if they begin to fall out of the race, and the Mets need help, it could make sense.

Juan Uribe 3B Cleveland Indians: Would the Mets consider bringing back Uribe after letting him go in the offseason? Uribe had provided veteran leadership and a strong bat off the bench for the Mets last season after coming over from the Braves in July. The issue is, Uribe only has four games of experience at first base in his career coming back in 2013, and it could be considered a risk to place him there defensively. Uribe is not having a strong statistical season for a contending Indians club, as he is only hitting .231 with one home run and 16 RBI’s in 116 plate appearances. He could come cheaply due to his numbers this season and the fact he is only signed for this season, or the Indians could value his veteran leadership for a club in contention and simply keep him.

Kelly Johnson Utility Player Atlanta Braves: Another possible player that the Mets could consider bringing back after letting him go in the offseason would be Kelly Johnson. Johnson can play all over the diamond and has experience at first base, appearing in five games at that position for the Mets last season. Johnson who came over with Uribe to the Mets last July played admirably for the Mets hitting .250 with 5 home runs and 13 RBI’s in 138 plate appearances. The Braves are the worst team in baseball and would have no issue unloading Johnson who is on a one year deal currently. It’s another interesting area the Mets may consider going if he can be had on the cheap.

Yonder Alonso 1B Oakland Athletics: Alonso was acquired by the A’s in the offseason from the Padres for stud left-hander Drew Pomeranz, which has ended up as a lopsided deal thus far. The A’s are loaded with corner infield prospects and could consider ridding themselves of Alonso as he is not having a great season for the struggling A’s. The Cuban first baseman would still be under team control for the Mets until 2018, when he is eligible for free agency. I’m not sure the Mets would offer much in the way of prospects as he is only hitting .225 in 138 plate appearances, despite the team control he possesses. Alderson loves buying low on players, and Alonso has been known as an on-base machine in the past. He doesn’t hit for power but he is a natural first baseman by trade and could help the Mets defensively. He would slide probably to the bottom of the Mets lineup but could come cheaply if the right deal is made.

James Loney 1B El Paso Chihuahuas (AAA): James Loney was surprisingly let go by the Tampa Bay Rays prior to Opening Day, and with teams rosters pretty much filled out, he settled for a minor league deal with the San Diego Padres. Loney’s deal does have an opt-out clause, and the Mets could elect to offer him a spot to their 25-man roster if they choose. The Padres do have a right of refusal which means they could add him to their roster first if he is claimed, but looking at the Padres roster currently there is no room for him. Loney is currently hitting .336 with 2 HR’s and 23 RBI’s with the Chihuahuas and has been a proven hitter at the big league level in the past. He doesn’t hit for much power but similarly to Yonder Alonso he is an on-base machine and can provide solid defense at first base as a natural first baseman. Loney has plenty of experience in the postseason with the Dodgers and Rays in the past, and would be a solid fit for the Mets.