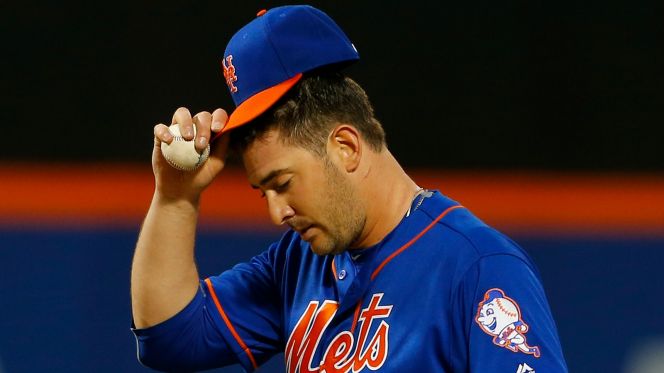 In case you have been living under a rock the past couple of months, the talk of baseball is currently surrounding Matt Harvey and his struggles thus far. It has been an alarming fall from grace for Harvey who was instrumental in helping get the Mets to last year’s World Series coming off of Tommy John surgery.

Right now there is no clear answer as to why Harvey has struggled so mightily this season. I believe it’s a combination of poor mechanics and possibly a dead arm. Harvey has lost a little bit of life off of his fastball but not enough to warrant him being hit the way he has been this season. There simply isn’t enough movement on his fastball or any of his off-speed pitches for that matter, and it is leading to his pitches just hanging out over the plate as meatballs. With the movement on his pitches lacking and possibly his pitches being poorly located he is getting lit up more than he has ever seen in his career before.

Do I think Harvey can bounce back from this? Absolutely. It was a shame to see Mets fans boo Harvey last night after he struggled in one of the biggest game’s this season so far. But Harvey is widely known around the league for his intense work ethic and it’s only a matter of time before he figures it out and makes everyone doubting him eat crow.

I don’t believe sitting him in his next start next week against the Nationals does him or the team any good. We aren’t talking about some flash in the pan pitcher here folks, we are talking about Matt freakin’ Harvey. Harvey is as competitive as any pitcher in baseball, and is going to want the ball no matter the circumstances. Let Harvey figure it out on the mound up here with the Mets. Stephen Strasburg had eerily identical numbers last season in almost every pitching category around the same time, as he was coming off two years removed from Tommy John surgery, and a full workload the previous season. Granted Harvey is coming off of more innings than any other pitcher has thrown coming off Tommy John surgery, but Strasburg faced similar circumstances that Harvey is facing this season, and turned it around in late June and finished the season strong.

This is something Harvey’s going to have to work through the rest of the season, but if it is something medical the Mets could elect to shut him down and have him figure it out on the farm. But for the time being Harvey is a gigantic piece to the Mets puzzle, and I don’t think skipping his turn in the rotation or sending him down with a phantom injury does any favors for either party. The Mets can afford at this point in the season to have him figure it out as we still have 75% of the season left to go. If it were late July or early August I might have a different opinion on this, but we still have two weeks left in May and plenty of baseball of left to be played. Get it together Matt we need you!