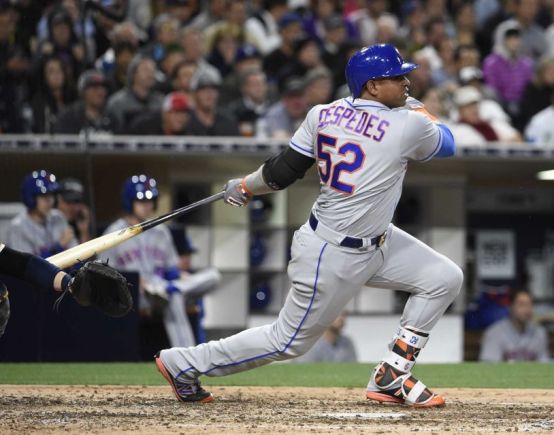 DINGER DELIGHT: New York has hit 42 home runs through its first 27 games, which is the most in team history after 27 contests…The Mets have hit 40 home runs in their last 19 games after just two in their first eight games…Overall, the Mets are tied for the major league lead with 42 home runs with Colorado.

HOMER CRAZY: The Mets have scored 68 of their 123 runs this year on home runs, for a 55.3 percentage, the highest rate in the majors according to the Elias Sports Bureau…The Mets have hit at least one home run in 17 of their 27 games.

SYNDERGAARD VS. PADRES: Has made two career starts against the Padres and is 1-1 with a 5.25 ERA in 12 innings pitched… Syndergaard has struck out 19 and walked none.

NO WALKING ALLOWED: Mets starting pitchers have walked three of 175 right-handed batters (1.7%) in the past 14 days, the lowest percentage in the majors…The league average is 8.0%.

ROAD WARRIOR: Curtis Granderson has reached base safely in 36 consecutive road games dating to August 8, 2015, the longest active streak in the major leagues…He is hitting .294 (15-51) with five home runs, nine RBI and 13 runs scored in 12 road contests this year…Granderson connected on fifth homer of the year last night…It was his 51st home run with the Mets.

METS VS. POMERANZ: Drew Pomeranz has made one career start against the Mets back in 2012 as a member of the Colorado Rockies…The 27-year old lefty pitched 4 innings while allowing 2 runs (1 earned) on 5 hits…Pomeranz walked 3 and struck out 4…Only four Mets hitters have plate appearances against Pomeranz which are provided below…