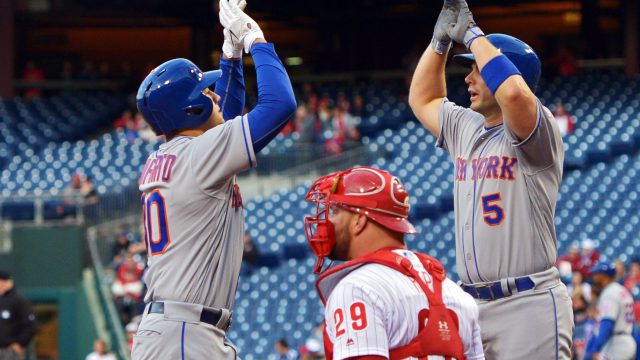 METS-PHILLIES NOTES: The Mets are 29-11 at Citizens Bank Park since 2012…After winning the first two games of the series, the Mets will look to sweep the three-game set…New York swept a four-game series in Philadelphia, August 24-27, 2015…The Mets have now won 10 of their last 12 series vs. the Phillies.

ROAD WARRIORS: The Mets are 4-1 on their nine-game road trip which includes a stop in Atlanta after tonight…New York is 5-2 on the road this season…The Mets went 41-40 on the road in 2015.

FIRST INNING FUN: The Mets have scored in the first inning in each of their last five games (eight runs total)…New York has gone 4-1 in those games…The Mets are 7-2 when they score first this year after going 61-24 when scoring first last year.

HISTORIC HOMER SPAN: The Mets have hit 17 home runs in their last five games, the most home runs over any five-game span in franchise history…The previous mark was 16 home runs over five games from August 19-24, 2015…Research courtesy of the Elias Sports Bureau.

NEIL WALKER: Hit two home runs last night and has three home runs in his last two games and five home runs over his last five games…His last five hits have all been home runs…He has never homered in three straight games…Last night was the fourth time in Walker’s career, he’s hit two home runs in a game, last on July 1, 2015, with Pittsburgh at Detroit…Walker has three homers vs. lefthanders this season, which ties his career-high for a single season…Walker also hit three home runs off a lefty in 2010…He is batting .636 (7-11) vs. lefthanders this year.

YOENIS CESPEDES: Has six extra-base hits (three home runs, two doubles, one triple) and nine RBI in his last five games.. Cespedes is tied for eighth in the majors with 12 RBI… Cespedes has four home runs and 10 RBI in eight career games at Citizens Bank Park.

THE DUDE: Lucas Duda has 11 home runs and 32 RBI in 41 career games at Citizens Bank Park, both are career-highs for a visiting ballpark…Duda belted six home runs and had 12 RBI in 11 games vs. the Phillies in 2015…Duda has six RBI in his last three games…He has hit a homer in two straight games…He had a home run in three consecutive contests in 2015 (September 25-29).

BARTOLO COLON: Picked up the win in the Mets’ 6-5 victory over the Cleveland Indians on April 15 at Progressive Field…Tossed 5.1 innings and allowed two runs, earned, on eight hits…Struck out five and walked one…The victory gave him win number 219 of his career, tying him with Pedro Martinez for the second-most all-time by a Dominican-born pitcher…His 219 wins are the most by any active Dominican-born pitcher in the majors…Since joining the Mets, he has made 10 starts against the Phillies and is 7-3 with a 2.86 ERA (21 earned runs/66.0 innings pitched)…Struck out 58 and walked nine…Has lost two straight starts against Philadelphia…Won seven of his first eight starts against the Phillies, including four straight from May 10-August 31, 2015.

METS VS. HELLICKSON: In 3 career starts against the Mets Jeremy Hellickson is 2-1 with a 7.04 ERA…In 15.1 innings Hellickson has allowed 12 ER with an 11/5 strikeout to walk ratio…In his last start against the Mets on April 10th Hellickson pitched 5.2 innings while allowing two earned runs on three hits while striking out five and only walking one…Notable Mets career numbers against Hellickson are provided below…