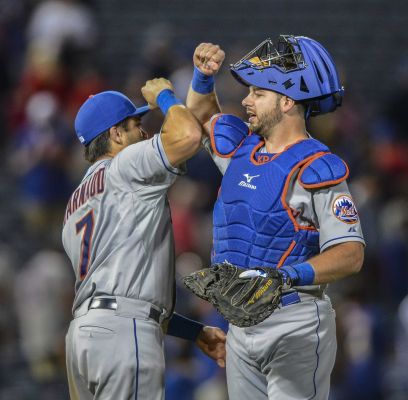 The Mets will enter Spring Training with two young talented catchers who may be counted on to do more than just field the catcher position. Sandy Alderson has stated as recently as yesterday that Travis d’Arnaud could, “dabble,” between first base and the outfield during Spring Training. Kevin Plawecki has also been considered a candidate for backing up Lucas Duda at first base. Plawecki however does have Minor League experience playing first base. I simply want to talk about what each of these players can bring to the Catching position and what expectations each of these players will be facing this season.

Travis d’Arnaud has had both of the words upside and potential attached to his name since he was a prospect in the Philadelphia Phillies system. When on the field for the Mets the past couple of seasons, d’Arnaud has flashed the upside and potential that ranked him the top minor league catching prospect in baseball. However d’Arnaud has a long list of injuries that have plagued him both with the Mets and when he was playing down in the Minor Leagues. Granted the injuries d’Arnaud suffered last season could be considered fluke injuries, it still is a concern when we are awaiting d’Arnaud to complete a full season healthy.

Offensively d’Arnaud has the potential to be a top five catcher at his position with his bat. In 44 at bats against left-handed pitching d’Arnaud absolutely raked to a batting average of .333, a slugging % of .689, and an OBP of .423. You have to think anytime the Mets face a left-handed pitcher this season d’Arnaud will be in the lineup. We also possibly found a new Philadelphia Phillies killer, last season in 42 at-bats, d’Arnaud hit .381 with a .449 OBP. Those are his highest totals against any team last season and he surely seems to love sticking it to the team that drafted him. If d’Arnaud can play around 130 games this season, he could easily hit around .260 with 20 HR’s and 80 RBI. d’Arnaud will be hitting possibly lower in a deep Mets lineup but he will surely have his opportunities to drive in runs. The only factors that work against d’Arnaud achieving those numbers are injuries.

Defensively d’Arnaud has improved compared to when he first arrived in the Major Leagues. His numbers throwing runners out had improved last season in comparison to 2014. In 2014 he was throwing runners out at a 19% clip and last season he threw runners out at a 33% clip. Mets pitchers also had a solid 3.87 ERA last season when throwing to d’Arnaud. You can expect that number to drop a little lower this season with d’Arnaud and the young pitchers feeling more comfortable and having more experience with each other this season.

Plawecki is a former first-round draft pick of the New York Mets from 2012. He had done nothing but absolutely rake in the Minor Leagues and was called up when d’Arnaud was injured in April. Plawecki’s bat didn’t necessarily translate to the Major League level right away and he had battled some bouts of dizziness during the season. However one has to remember that the position of catcher is one of the hardest positions to adjust to when coming up, and we saw the same struggles with d’Arnaud’s bat back in 2013. I believe Plawecki did a great job in holding down the fort for the pitching staff last season while he was up, and I believe that was more important than his offensive numbers.

Offensively, it is tough to predict what kind of numbers Plawecki will put up, as we do not know how Terry Collins will split playing time between him and d’Arnaud. We also do not know if he will be counted on to back-up Lucas Duda, which in turn could lead to more at-bats. Plawecki had much better numbers against right-handed pitching than lefties, last season. Against left handed pitching Plawecki had an average of .122 with OBP of .143. Against righties Plawecki had an average of .240 with an OBP of .307. Depending on playing time, if Plawecki could hit around .250, with around 10 HR’s, and 40-50 RBI, I would consider that a win offensively.

Plawecki was able to hold his own defensively and with the pitching staff. Mets pitchers had an impressive 2.78 ERA with Plawecki behind the plate last season. That is quite an impressive number for a rookie backstop. Plawecki also had only 2 passed balls and threw out runners at 26% clip. If Plawecki can take another step forward defensively while getting more comfortable in the batters box, Mets fans and myself will be pleased.